A bit of a running theme through the last several posts has been Cocona awakening to her feelings for Papika, and more generally coming to terms with the fact that she’s gay.

We will continue that discussion next week, but this week lets pull back a bit and discuss some of the discussion that went on about Flip Flappers as it aired.

When it aired, Pure Play was seen as a turning point for the show by many viewers. The point where the main objective of the series was revealed. After previous episodes went to Pure Illusions not explicitly tied to any particular character (though some are quite obvious in retrospect), Pure Play explicitly and undeniably was about a specific character’s Pure Illusion; Irodori Iroha. 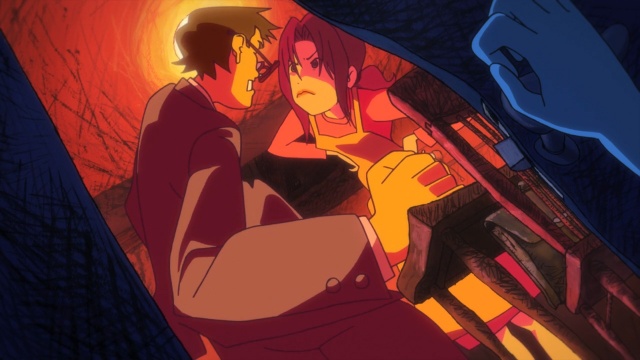 Cocona and Papika’s time in Iroha’s Pure Illusion was drastically different from any thus far, and its conclusion drastically changed things in the real world. The first time that had ever happened. In the wake of this episode, it was widely suggested that going forward, Cocona and Papika would visit other characters’ Pure Illusions, and learn about them through the events there, and enact more changes on the real world.

This, suffice to say, is not what happened. In retrospect, this represents a complete misreading of the very purpose of Flip Flappers. Though in fairness, this didn’t become obvious until the following episode. But even in this episode, what Cocona did inside Iroha’s Pure Illusion is not framed as a success. In fact, Cocona is horrified to learn what she did, and the changes they caused in Iroha.

It was suggested that Flip Flappers would have been a more meaningful series if it had spent its time investigating psychological issues the way it did with Iroha. The way it framed Iroha’s time at home compared to her time with her “aunt” was fantastic, no doubt. But thats not really what the show wanted to be about, or what it had ever suggested it was about.

It turns out that a lot of people just really can’t get the message unless its spelled out explicitly to their face. But thats our discussion for next time!