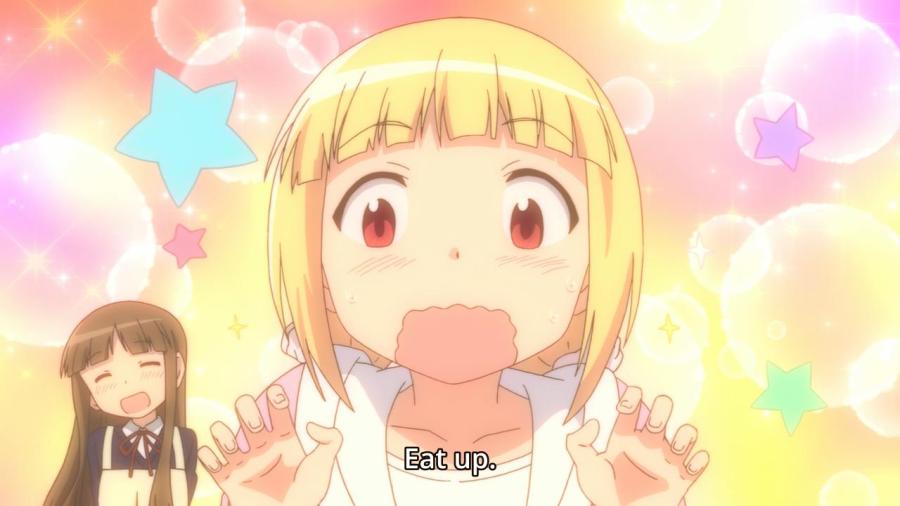 A new season is upon us already! What shows have made the cut? Lets find out!

Alice to Zouroku is a show that really shouldn’t work. Trying to combine a slice of life story about a young girl being raised by an old man and his granddaughter with a show about kids with supernatural powers being hunted by a secret organization is…not a good idea. But, somehow, it works. At least so far. The slice of life side of the show is by far its strongest, perhaps unsurprising considering director Sakurabi Katsushi previously brought us the very good and very relaxing Flying Witch.

The super-powered side of the show isn’t bad either, mind. Sana’s powers are vague, but that is clearly the point, considering that the twins have very firmly defined abilities. The fight scene in the first episode, while featuring some rather dodgy CG vehicles, was well laid out and fun to watch as a concept. Hopefully the show leans mostly into its very comfy slice of life side, while using the superpower side as flavoring and a plot mover. But so far, its doing a really good job of balancing them.

Translated as “What do you do at the end of the world? Are you busy? Will you save us?”, or colloquially known as “SukaSuka”, this was surprisingly the most anticipated show of the season for many people. So far SukaSuka’s main strength has been its atmosphere. It has done a good job of creating a fantasy world that feels believably different, but still lived in. Having the majority of the population be beast-people, with humans or more human-like people being discriminated against is interesting, though its uncertain how much that will come up. Having the entire main cast have normal human appearance feels like a missed opportunity.

The flash forward at the beginning, and the general mystery around the “weapons warehouse” that seems to be more of an orphanage for lost little girls definitely indicates the show is going somewhere fairly serious, but the show has managed some very good comedy. Protagonist Willem’s interactions with the very pretty troll Nygglatho, who promises she doesn’t really want to eat him were quite fun. Hopefully the show limits the romance stuff to the more adult characters like Nygglatho or Chtholly, letting the younger girls remain more as daughter figures. Also the names in this show are very dumb. Just putting that out there. 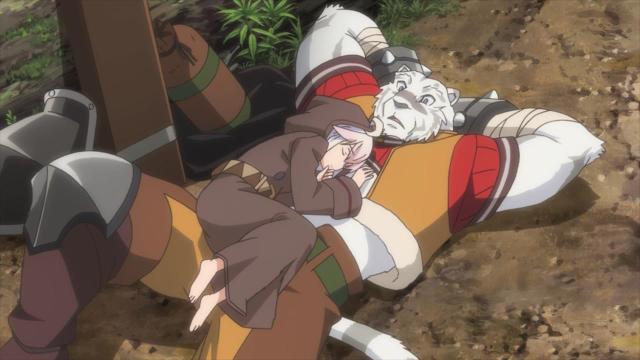 So apparently this is the season for surprisingly good Light Novel based fantasy series! The most interesting part of this show so far is actually the male lead. Currently unnamed, simply known as “Mercenary”, he’s a good example of how to make a male lead not bad. Start by making him a giant moe tiger-man. Ok thats not entirely what it is. He’s competent, but not cocky. He’s strong, but not in a ridiculous way. He is wary of Zero and her powers, but doesn’t act like an idiot over it. He, in short, acts like an actual adult.

Zero, for her part, is less immediately compelling but she’s pretty fun to watch. She’s snarky in a way that almost breaks the illusion of the setting, but she does it with such complete poise and confidence that it totally works. The show has been compared to Chaika the Coffin Princess, and thats a fairly apt comparison. If you enjoyed Chaika or Scrapped Princess, this is definitely a show to try.

Ok, so not every show this season is about a man raising little girls. This show is about a young woman who can’t get a job! No really that’s the idea. Koharu Yoshino is right out of college and can’t get any company she applies for to give her anything more than an apology e-mail wishing her the best in her future endeavors. So, desperate, she signs up for what she thinks is a one-off gig out in the boonies, and ends up stuck there as the “Queen” of a small-town tourist trap for a year. Hey, at least its a job.

Yoshino is a lot of fun to follow around. She’s determined, but upbeat, despite numerous rejections. She forms easy friendships with the other young women in the town that are around her age. Episode 2 features all five of the main cast coming together to try and sell one-thousand boxes of gimmicky manjuu, and while they fail, it was a lot of fun watching them try and it brought them all together in a surprisingly natural way. 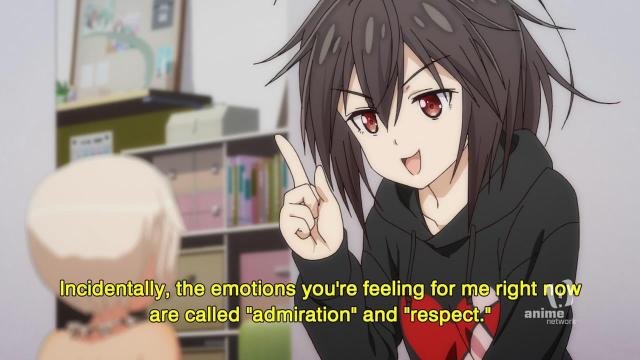 This show is very silly, but so far its been significantly better than expected. The concept of course is absurd. “Frame Arms Girls” are plastic model kits of mecha musume. Similar to the older Busou Shinki figures, but from a different company (Kotobukiya instead of Konami). And the show itself is broadly similar to the Busou Shinki anime. The main difference here is that our human lead character is a girl, which makes basically everything better.

Ao’s relationship with her ever increasing set of Frame Arms Girls has turned out to be one of the key aspects of the show. She’s half best friend, half older sister, half mother to them. Yes thats three halves. Deal with it. With even more Frame Arms Girls coming in future episodes, it’ll be interesting to see how they relate to Ao, and how they relate to each other as well.

SIN: SEVEN DEADLY SINS does not have this problem. Within minutes of starting we have a girl licking another girl’s nipples, because thats what you do when an angel falls to hell and she’s the angel you have been in love with forever. The character and costume designs are delightfully ridiculous, with shout-outs to Leviatan’s belt-skirt and bandaid panties, as well as the Catholic Girls’ School who’s uniform prominently features spandex hotpants under 2-inch long micro-skirts.

This is our Cute Girls Doing Cute Things show for the season (though Frame Arms Girls is pretty close to being that) and…its perfectly fine. Ok, that makes me sound more down on it than I actually am. Its very pleasant to watch, the character designs are fun and expressive and the core concept is solid. It just hasn’t yet elevated itself above those basic things that almost all these shows manage to hit. 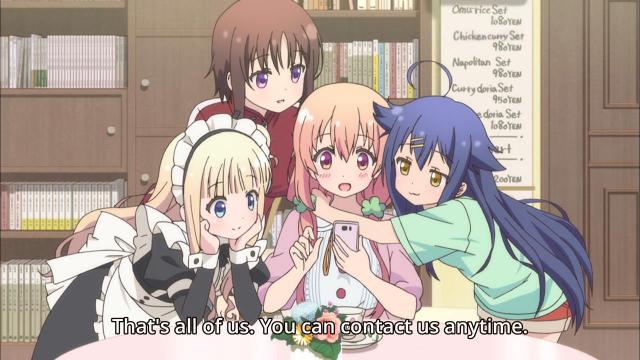 So far the best part of the show has been the very fun OP and ED sequences, and the eyecatches which put the characters into famous musicals. West Side Story and Wizard of Oz so far. Hopefully the girls will put on some performances and we’ll get to see them in neat costumes and such. That honestly seems like the most interesting place the show can go. There are actually very few anime about being a theater troupe! 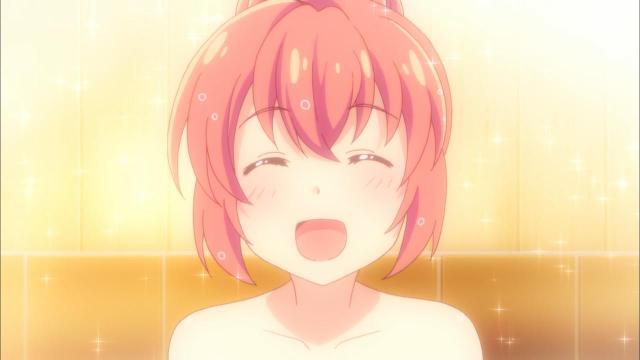 Sequel to a show by basically the same name from like 5 years ago, Twin Angel is…well, its kinda exactly what it tries to be. Its a late-night magical girl show that leans into random gags and non-sequiturs and could probably be just a normal little girl magical girl show if it was just a bit less overtly horny than it is. Its not bad though. Its just not really showing much in the way of ambition. The most interesting thing about it so far is that the hedgehog mascot is almost certainly one of the main girls from the previous series. Which is odd.

Anyway, the two leads are pretty fun to be around, and the secondary cast is entertainingly quirky for when they show up. The biggest downside is the fight scenes are actually hilariously lame. To the point where you’d almost think that was part of the joke. The target audience for this show is pretty narrow, but if you are in it, you’ll probably like it a lot.

This has honestly been pretty disappointing. Of the 8 skits so far, most have just been super basic riffs on a given character’s most glaring personality trait (did you know that Mika is hot!?), without any of the clever stuff that made things like Puchimas entertaining. But its 4 minutes a week so its not like its a huge time investment.

One thought on “Spring 2017 Overview”