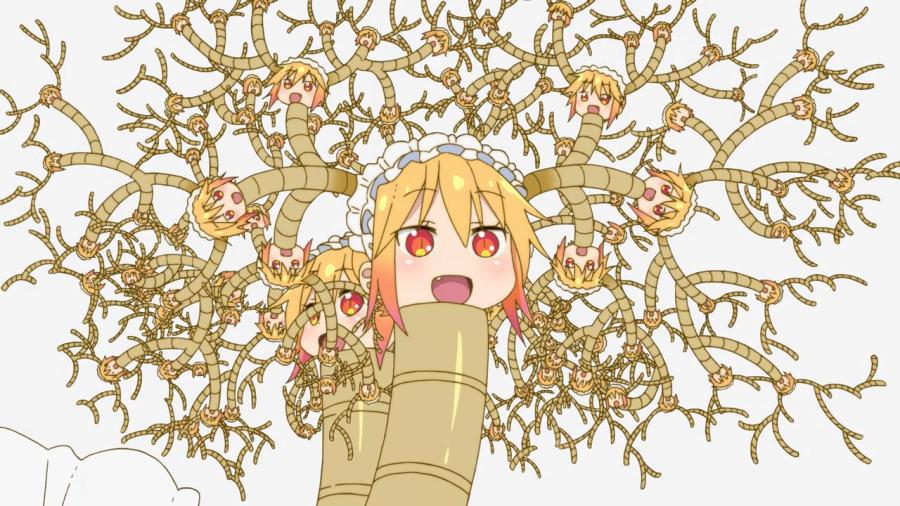 Wow its a non-Flip Flappers post! Is this even allowed?

Anyway, now that Winter Season has aired basically everything of interest to me, I thought I’d run down what I plan on watching. As it stands the only show I’m interested in that hasn’t aired yet is BanG Dream! but it doesn’t air until the 21st, which is ridiculous. Keep in mind that I don’t try every show in a season, I used to do that but its no longer something I enjoy. So far I’ve kept every show I’ve tried, so lets get about this

This was easily my most aniticipated show of the season. An actual, honest to Madokami yuri manga being adapted by KyoAni. I’d read what was translated of it maybe two or so years ago, but until the announcement I’d mostly forgotten about it. I picked up the first volume of the English release by Seven Seas and I remembered how fun it was. Anyway, the show is about Kobayashi, a somewhat dour programmer who got drunk one night and ended up inviting a dragon to live with her. Tohru, the dragon in question, is totally up for this, and not only because she really really really really loves Kobayashi. Sexually. 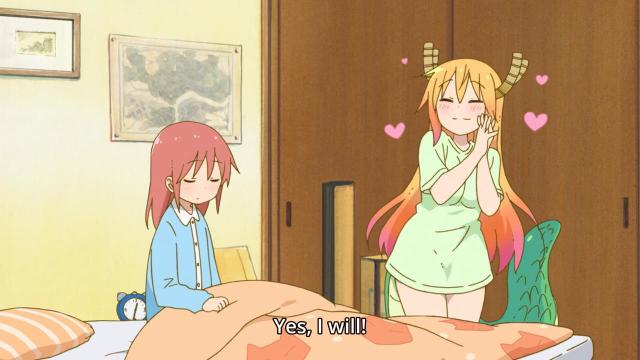 KyoAni’s adaption prowess is in full effect here. Its not nearly as atmospheric and detailed as Hibike! Euphonium or Hyouka, but that doesn’t lessen its visual impact. Filled with excellent color design and fun animation, they’ve brought the manga to life even more effectively than I hoped. They have also already started adding to and fleshing out the material. Considering that episode 1 covered half of volume 1 and episode 2 looks to cover the rest, this isn’t a surprise. There is a scene with Tohru at the end of the episode that is one of the finest character moments I’ve seen yet this season.

You can watch Kobayashi-san Chi no MaiDragon free on Crunchyroll! 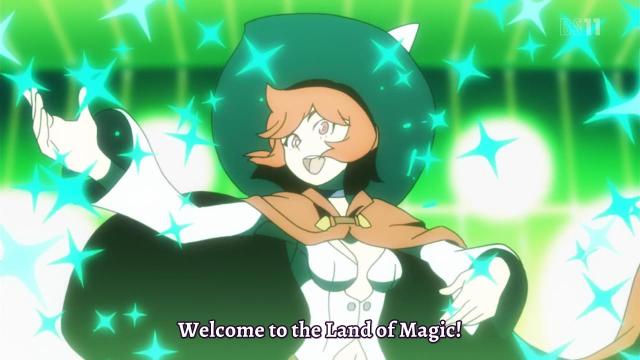 I loved the first Little Witch Academia OVA and while I somehow never actually watched the second (despite backing it on Kickstarter) I’m positive I will love it to when I get around to it someday. Anyway! Even if I had no idea what this was going in, it would have been fantastic. Taking us back to the very beginning with Akko first heading off to Luna Nova Magical Academy. What ensues is a fun little adventure that has Akko get acquainted with future best friends and roommates Lotte and Sucy.

The production looks excellent, rivaled only by MaiDragon, though even more cartoony amazingly enough. Its not quite as utterly gorgeous as the OVAs of course, but still looks great on every level. If you are interested in learning more about its production make sure to check out kViN’s write ups on the series over at Sakuga Blog!

Sadly Netflix has Little Witch Academia and won’t be releasing it till the end of the season, so if you want to watch it you will need to use Alternative Methods.

I’m tempted to bump this one up to the top level, but it just lacks the panache that MaiDragon and LWA have. Its certainly not bad though! Its about four girls who have come to a place called “Labyrinth Town” to become “Urara” or professional diviners. Its very cute and very gay. The main character, Chiya, is probably best described as Wolf Papika. Energetic, slightly feral, likes to sniff people.

Based on a manga that runs in one of the Manga Time Kirara mags, its cute girls doing cute things in a fairly non-standard setting (the closest comparison is probably Kyousougiga). Its a bit higher on fanservice than most shows in this vein. Chiya has a tendency to show her stomach when apologizing, and she’s very, very touchy-feely with the other girls.

Dogakobo is probably the masters at Cute Girls Doing Cute Things In Cartoony Ways, so its not surprising that this very cartoony show of Cute Girls doing (ok not actually) Cute Things is from them. Also its basically just Himouto Umaru-chan only without the imouto part. Same mangaka even. Anyway, Gabdro as its known is about one Tenma Gabriel White, top of her class at Angel School who is now being sent to Earth to attend High School and do good deeds.

Gabriel is a diligent little angel until she accidentally starts playing a Free To Play MMO and promptly falls down the hole into slacker otakudom. She’s joined by her best friend Tsukinose Vignette April, a diligent devil who never seems to quite get around to devilry, who tries her best to get Gabriel to shape up before she’s shipped out. Rounding out the cast is Kurumizawa Satanichia McDowell, a devil who’s evil deeds are minor but her dramatic music is major and Shiraha Raphiel Ainsworth, an angel with a sadist soul. All together these four are going to…probably accomplish nothing at all.

Anyway, this is a fun show that uses its central jokes quite effectively. And its a little gay. Gab/Vigne OTP.

Gabriel Dropout can be streamed for free on Crunchyroll! (don’t pirate this one ok?)

What if you came home to three cute cats who weren’t just cats but little cat girls who wanted to cheer you up? This is that show. Its cute. Watch it.

Nyanko Days is on Crunchyroll! 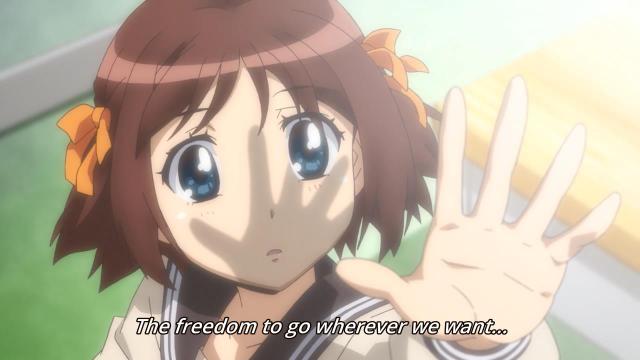 That mouthful means “Minami Kamakura  High School Girls Cycling Club” and well, that’s what this is. The second bike-girls show in two seasons, and the third within a year if you count Motorcycles, which is appropriate because the main character of this is literally Hane from Bakuon!, right down to her seiyuu. So is it any good? Well, its ok. Episode 2 improved my opinion of it a lot. I still don’t like it as much as last season’s Long Riders, though this definitely has better production values. 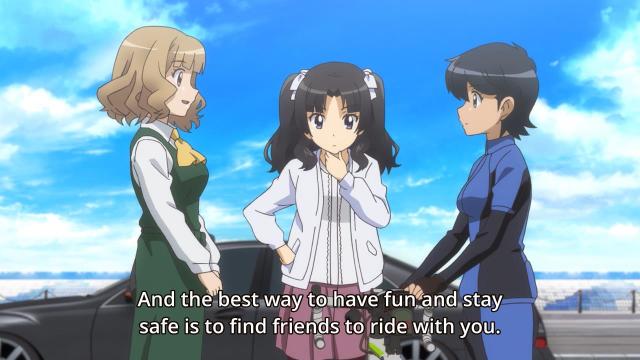 Also this is very blatantly an add for the city of Kamakura. They even helped produce it. Which thats fine, Kamakura is a pretty place. Quite a few anime have used it as a setting. So while not a huge amount has actually happened in these two episodes, we’ve sure gotten a lot of gorgeous Kamakura scenery. Eventually I’m sure we’ll get to the bicycle club part of the name. Honestly I’d rather have Long Riders with this show’s production but oh well

MinaKama is streaming on Crunchyroll! 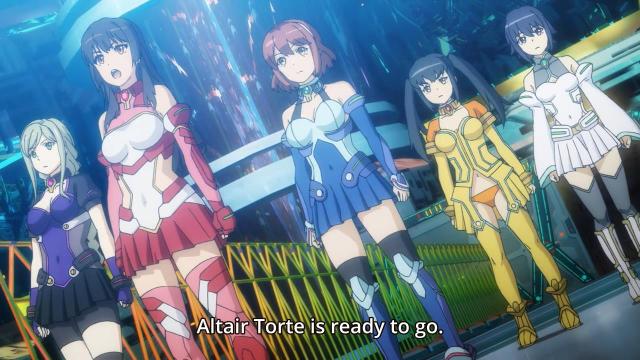 Schoolgirl Strikers is based on a Mobage by the same name and its…fine. I wish I could be more enthused about this show, but its just very thoroughly fine. The first episode had a bit of a spark to it, but episode 2 dragged it down. Pretty much the inverse of what MinaKama had. Anyway, its about a group of girls who go to a special school and also fight monsters in the fifth dimension in their spare time. 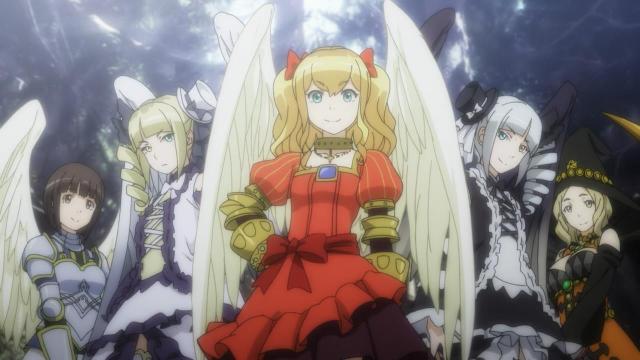 Its ok. Not the best version of this concept (go watch Ange Vierge if you haven’t and want a good Mobage anime), but also far from the worst. And there is no dumb self insert male lead to be obnoxious. That being said, the main girls haven’t exactly distinguished themselves. Of the four teams of 5 we’ve met, they are sadly the least interesting. Hopefully they will grow into things, but so far its just been very ok.

Schoolgirl Strikers is on Crunchyroll. 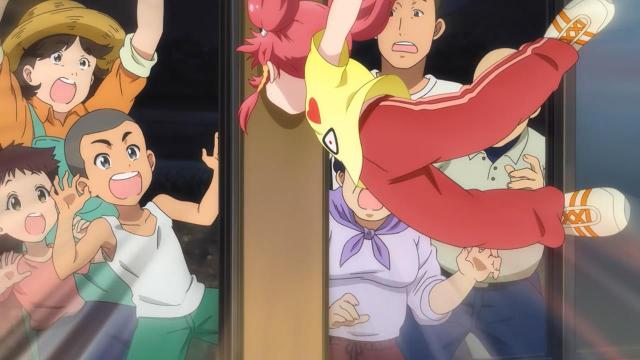 This is no Aikatsu, thats for sure. So the idea here is that idols are getting elected to the Diet (the Japanese Parliament) and this will…this will…well it will something. The show doesn’t seem entirely clear on what this will accomplish. It sounds like the concept for a biting satire but somehow its not. In fact episode 1 plays out pretty much like the first episode of any given idol series. With an unknown girl plucked out by a producer and given her big break as an idol. And on that front its fine, if unspectacular. But given the context of the series it feels like there should be more. 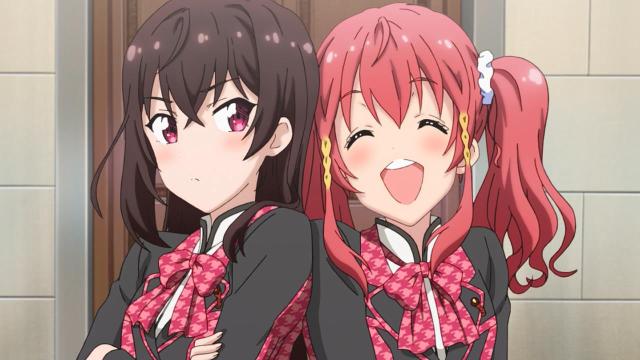 Also I can’t remember anyone’s name and don’t feel like looking them up, so that tells you about where I feel about this. It’ll get a few more episodes to see if its got some sort of point it wants to make. Also the character designs are kinda bad which is not something you want to say about an idol show.

Idol Jihen is airing on Crunchyroll.

Yeah it gets its own category. Ok, first the good. This show is incredibly charming. Its fun to watch, the character interactions are a joy to behold. The animation bouncy, the faces are funny, the voice acting is superb. By all rights I should unreservedly love this show. The problem comes from the fact that it has the potential to do something I really, really dislike.

Ok, so the show is about a world where there are “Demi-humans” or “Demi” as the teenage girls in question like to be called. They are more-or-less normal but have…a few issues. The Vampire gets weak in the sunlight and needs a bit of blood supplements each month. The Dullahan has to carry her head around and be careful with it. The Succubus teacher tries to avoid crowded spaces with men. That sort of thing. The lead is a male teacher who wants to write his college thesis on Demi-humans, so when he learns there are several among the student body, he decides to interview them. The first episode featured the vampire girl, Hikari. She’s charming and clever and cute and its just a great time.

My problem is that given the type of manga this is, I think it might try to set up actual romantic stuff with the teacher and the girls and while I’m not a huge fan of hetero relationships in fiction (mostly just bored with them) I really, REALLY dislike teacher-student relationships and especially ones with a male teacher. So if that happens this will probably get dropped. And its a real shame, the concept is great and it has the potential to be a very fun, lighthearted show about getting about in the world while being just a bit different. SO DON’T BLOW IT

Demi-chan is streaming on Crunchyroll.

I’ll try to remember to update this post when it airs. Anyway the reason to look forward to this is that its series composer is Ayana Yuniko, who was behind the story concept and the first half scripts for Flip Flappers. So it could be really interesting. Or not. Who knows.

And thats it! Ten shows this season, which if I actually finish all of them would make it one of my heavier seasons in general. I won’t be blogging any of these weekly or anything, but I’ll try to do a mid-season update post.

One thought on “Winter 2017 Overview”